Thank you for your patience while we retrieve your images.

The bitterroot is the State Flower of Montana.

The bitter roots of this plant were long utilized by American Indians of the area as a food source. The bitter roots were boiled to make them palatable and often mixed with meats or berries.

The plant was given it's scientific name by Captain Meriwether Lewis during the CORPS of Discovery Expedition.

The Salish People tell this story of the origin of the bitterroot flower:
"Long ago, when the Salish people still lived to the south in the area that is now called the Bitterroot Valley, there was a time of severe famine. In those sad days there lived a righteous old woman, the wife of a medicine man. The old woman grieved for her children who were slowly starving. With no meat and no fish to eat, her sons were doing their best to get by on some old dried up shoots of balsamroot. Even those were nearly gone.

“My sons have nothing to eat and will soon be dead”, she sobbed. So she took herself down to the banks of the creek we call Little Bitterroot and laid herself down to mourn for her children. With her face to the ground and her old gray hair spread about her head she wept bitter tears as she wailed a song of death.

As The Sun rose up over the mountains and peered down into the valley, he was greatly sorrowed to hear the old woman’s death chant. The Sun called forth the guardian spirit of the woman and said, “Your daughter is in need. Go to her; give her comfort and bring forth food and beauty from that which is dead.”

Assuming the form of a beautiful red bird, the guardian spirit flew down to the old woman and gently spoke to her. “Your bitter tears have soaked the earth beneath you. Even now they are mingling with the dead vegetation below to form the roots of a new plant. Its fleshy leaves will lay upon the ground and a beautiful flower will rise up to the Sun. Its blossom will share the silver-white color of your hair and the rosy hue of my wings. Your children will dig the roots of our gift plant. Though they will find its taste as bitter as your tears have been, they will know that it is good food and they will grow to love it.

Each year, in the moon of deep water, they will see the return of the blossoms and say, “See, there is the silver hair of our mother upon the ground and there are the rosy wings of the spirit bird. The love and bitter tears of our mother have provided us with food for all generations.”

Every year, around the end of May or the beginning of June (usually - they were late the last couple years), these lovely flowers open up, seemingly out of the rocks themselves, along the rocky slopes of Big Sky Country. Two great places "in my neck of the woods" to find them are the Bitterroot Trail at The National Bison Range on the Flathead Indian Reservation, where this photo was taken, and on Waterworks Hill on the outskirts of Missoula.
Categories & Keywords
Category:Scenic
Subcategory:Flowers
Subcategory Detail:
Keywords:Bison Range, Lewisia rediviva, NBR, bitterroot, wildflower
© Katie LaSalle-Lowery 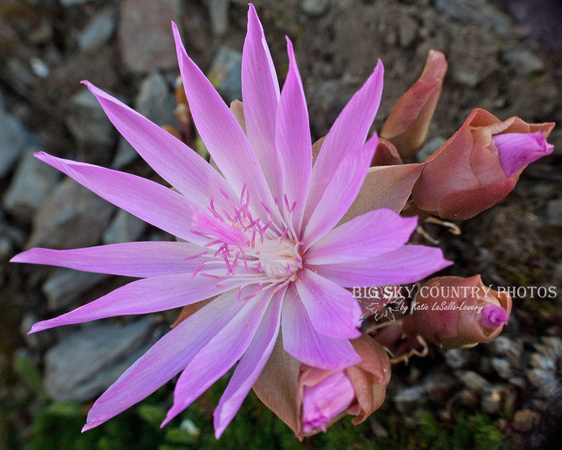